The Students are Revolting 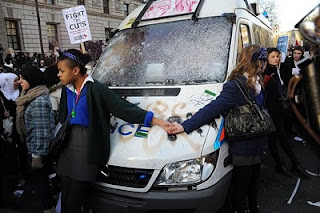 No, any successful arguments here have to concern themselves with the only thing Conservative politicians actually do care about:

Raising student fees will, we are told, “save money”.

This, of course, is bollocks. No money will be saved, the money required will, ceteris paribus, be exactly the same. The only real questions are about who should pay this money.

In the past, the tax-payer paid.

Now, one of the things about PAYE tax is that everyone in the country is essentially means-tested each year to make sure they are paying the right amount of tax. Low earners pay less tax. High earners pay more. We used to use some of this money for paying student fees.

Instead we now means-test students before they apply to university to see if they are entitled to a loan, then we means-test them in a more detailed fashion to see how much of a loan and what types of loan, they are entitled to. Once they leave University and get a job we means-test them regularly to see if their income has passed the required threshold for starting to pay the money back and then we calculate – on an on-going basis- how much they have paid, how much interest is due, whether they are still earning enough to continue paying back, how much they still need to pay, and what size the instalments should be.

All this alongside the normal means-testing conducted by the Inland Revenue on all its PAYE “customers” (as I believe we are known these days) each year (though perhaps there is some pooling of information).

I think it goes without saying that the infrastructure required to make all these calculations and to police the loans system is enormously expensive. Far from saving money, this system devours money as Eric Pickles devours pies.

“But making the tax-payer pay for other people’s education isn’t fair” bleat the Conservative politicians and newspapers - for whom fairness is and always has been the very scourge of the earth. Even the esteemed @DAaronovitch (for whom I have a lot of admiration and who does care about social justice) has presented versions of this argument.

The only people I can see who were “unfairly” treated by the system we had before student loans were high earners who did not go to university. They, though their higher taxes, were paying for education from which they themselves never benefited.

So we need to save money and rescue the Liberal Democrats from the dreadful bind they now find themselves in.

Abolish student loans and pay all university fees by raising income tax for the better off.

Let's just fucking do it!
Posted by Dr Michael Ward at 4:39 PM