OK I give in. Peter Hitchens is right. (A UK blogger's reply to just criticism)

I've argued the MMR topic with Peter Hitchens at some length (see here, here [by me], here, here [by me], here, here, and here).
Whatever else you might wish to accuse Peter Hitchens of, you cannot accuse him of laconicism.
Mr Hitchens has requested that I reply again to some of his points.
Sadly, I have little to add on the specific subject of MMR: If you are a parent, the best thing you can do for your kids (unless your GP advises you of any contraindications in your individual child's case) is to get him or her vaccinated on schedule and ignore any contrary suggestions in the tabloid newspapers - these suggestions are irresponsible and wrong. I shall add that, if you want to learn more about real science and real controversies in science and want something accessible, read New Scientist or read Jim Al-Khalili or Jon Butterworth or Tom Chivers or Brian Cox or Edzard Ernst or Kevin Fong or Suzi Gage or Steve Jones or Alok Jha or Alice Roberts or Martin Robbins or Adam Rutherford or Simon Singh or any of the countless scientists and scientifically literate journalists who actually know what they are talking about and write excellent (and accurate) articles in the mainstream press.
Meanwhile I have been ignoring my own advice and reading some of Mr Hitchens's other thoughts - this time on the subject of evolution (here and here and here) and I've come to realize there's a unbridgeable gulf between Mr Hitchens and me.
You see I have always held the opinion that truth is (by and large) arrived at via the methods of logic and mathematics (which can "prove" things) or via the methods of empirical science (which can never prove things but can deliver well tested theories about the world and - crucially - modify those theories in the light of new evidence). Mr Hitchens takes an alternative view: truth is arrived at by whatever pops into his head on a particular day.
Unfortunately, there is no meta-argument that can establish that my opinion here is any better than Mr Hitchens's. (This is essentially the point which the post-modernists - often unfairly maligned by my comrades in skepticism - make.)
You might want to retort that we can establish that (say) medical advice based on mainstream science is better than medical advice based on what Mr Hitchens thinks and we can establish this by pointing to scientific evidence and statistical analyses of that evidence; but you would be missing the point. Mr Hitchens does not accept that empirical evidence or logic are relevant criteria for evaluating empirical claims. His position is unassailable.
I am forced, therefore, to concede that I am in the wrong. I have no knock down arguments against Mr Hitchens. There is no philosophical super-position from which someone can arbitrate between our respective opinions. I can only say, to paraphrase Wittgenstein, that Peter Hitchens and I had parted company before we ever began to speak to one another.

I should stop writing here. You, dear reader, are forgiven if you stop reading here. I promised Martin Robbins that I would stop giving Mr Hitchens any more excuses to propagate his anti-vaccination memes. But I'm afraid I can't help myself. In addition to his arguments relating to MMR, Peter Hitchens made a number of assertions and ad hominem attacks which he obviously thought were relevant to the safety of MMR - though I couldn't quite see the connection - and I feel compelled to address some of them:

Could the choice of a picture of me holding a rifle in a gun shop in Idaho be there to predispose liberal-minded readers against me? 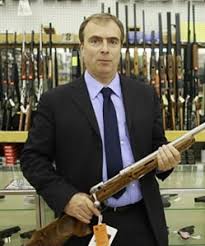 Let me put Mr Hitchens's mind at rest. I tried to use the picture he puts at the top of his blog. It is protected. I hit Google images, typed in "Peter Hitchens" and started to scroll. My eyes alighted on the above picture and various ideas drifted across my synapses: "shots" (gedit?) "loose cannon". None of these quite seemed to work. Then I realized why this picture had caught my eye. Peter Hitchens has exactly the same expression I saw on my cat's face when once (in exasperation) I handed her the tin-opener. It occurred to me that this picture - man holding a dangerous object which he doesn't quite know how to use - was perfect. Okay, the real dangerous object in Peter Hitchens's hands is a computer keyboard rather than a gun but, as the old saying (which I suppose needs updating) goes: the pen is mightier than the sword.
Ten seconds after that picture was taken, the gun went off accidently and the bullet ricochet off the wall bringing down a chandelier on Mr Hitchins's (and the photographer's) heads. Mr Hitchens blamed the photographer for startling him. (Okay I made all that up but I think you'll agree it's hard to imagine any other scenario after seeing that picture.)
Next time I shall try and find a picture of Mr Hitches holding a kitten.

The author, I note, displays a picture of himself looking like a really cool dude, shades and all. 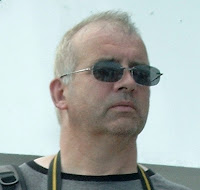 Again, let me set the record straight. This picture is cropped from a holiday snap taken by my wife. It shows me in a pair of prescription sunglasses which I obtained from Spec Savers in Bradford (such is the glamorous life I lead). Since those spectacles are now at the bottom of the Aegean Sea (following an unfortunate encounter with those laws of physics which scientists just make up to upset Peter Hitchens) and since the sun visits Bradford about as often as the light of reason visits Peter Hitchens, I almost never venture out round here in "shades". Using the "really cool dude" picture for my twitter account has the advantage that people don't point at me as I walk down the street and say "look there's that chap who Peter Hitchens is always writing about in the Mail".
Perhaps I should try and find a picture of myself holding a gun.

Mike Ward is a proxy for David Aaronovitch a former enthusiast of the late Communist Party of Great Britain who has not devoted much time to repudiating his past affiliation to the Party of Brezhnev and Andropov. 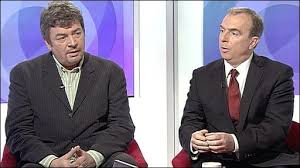 (I couldn't find a picture of David with a kitten or a gun, but here he is attempting to maintain his composure.)
This is going to get a bit "Life of Brian", but please bear with me.
Both Peter Hitchens and David Aaronovitch were (as they both freely admit) members of left-wing parties in their younger days.
Peter Hitchens was a member of the International Socialists (now the Socialist Workers' Party) which advocated violent revolution and whose members (who were there in force on many CND or anti-fascist demonstrations I attended in my youth) used to chant (using words which seemed to be directed at the likes of David Aaronovitch rather than at the general public) "Parliamentary-roadism out out out". They probably still do.
David Aaronovitch was a member of the Communist Party of Great Britain which subscribed to parliamentary democracy and was highly critical of Brezhnev's Soviet Union (I'm not sure what they ever said about Andropov since he dropped dead shortly after taking office and I wasn't really paying attention). David Aaronovitch was very much on the right (anti-Soviet, "Euro-communist") wing of that Party which (unlike the SWP and like Communist parties all over the world) disbanded when it finally hit home that the empirical evidence was not declaring socialism to be a historical success.
Though both have moved on a lot since their days as socialist firebrands, David Aaronovitch has increasingly eschewed wilder ideas about the ways of the world in favour of ideas with a firm evidential basis. Peter Hitchens has simply swapped one species of far-fetched dogmatism for another.
I have never met David Aaronovitch and have never been his "proxy". I do feel a certain kinship with David, I have a similar age and BMI, have kids of a similar age, have travelled a similar intellectual road (though he's gone down that road further than I have) and I rather enjoy reading or hearing what he has to say. All that being said, I often disagree with him. Fortunately we don't disagree about how knowledge is arrived at so twitter dialogues between us have a point. He has certainly often influenced me.
But to finally come to the point of this rather rambling section: One issue on which I part company with David is on what Hitchens (rightly - IMHO) calls "Mr Blair’s idiotic and disastrous war on Iraq". But this very topic fatally exposes the flawed nature of Peter Hitchens's style of reasoning:

ii) There is no simple relationship between someone's political opinions and their views about science and one can't just dismiss what David Aaronovitch and I have to say about MMR with "well that's just what you'd expect someone who supported the Iraq war to say."


There is no simple relationship between someone's political opinions and their views about science and one can't just dismiss what David Aaronovitch and I have to say about MMR with "well that's just what you'd expect someone who supported the decriminalization of drugs to say."

Is there any coherent thread here?
Not really, but let me try and spin one.
Let's see: cats, communism, David Aaronovitch, drugs, and Peter Hitchens .... hmmm.
Okay got it!
Many moons ago, I announced on Twitter that my cat had correctly answered the question "who led The Long March".
Someone out there will recognize where I pinched this from. Drugs are closely involved. [2]
David Aaronovitch expressed some scepticism that my cat had correctly identified Zhou Enlai. My son Max and I set about trying to teach our cat to say "Zhou Enlai" instead of "Mao", but it quickly became apparent that A) we were never going to succeed, and B) even if we did succeed, we would fool nobody and it was always going to be a waste of time discussing Chinese history with our cat.......
... rather like discussing MMR or evolution or drug policy or .. well, almost anything, with Peter Hitchens.


{1] David Aaronovitch has informed me that his views on drugs policy are far more equivocal than I suggest above, but I'm not trying to pick any fights on that score at the moment. My main point still stands: PH can't just lump people together in a kind of seamless conspiratorial group on the basis that their shared views in one area differ from his own.
[2] Ha I've found it.
Posted by Dr Michael Ward at 5:02 PM