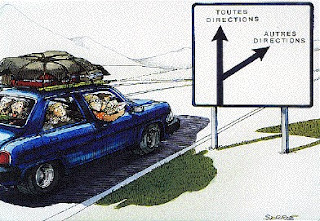 Driving almost anywhere in the UK has become a nightmare, but driving along the D roads of France is a pleasure I have always treasured - and one that is still available even today.

France has a wonderful system of roads – all numbered in a highly logical way – and wonderful (again, highly logical) Michelin maps to help you navigate your way around.

Unfortunately, there is a catch. In fact there are several catches. If you drive through the back roads of France, you will frequently get lost (and often hopelessly so.).

As a Francophile (and general nerd) I have spent many years thinking deeply about why this is the case. Here are the results of my internal deliberations:

The arrows of outrageous foredoom

How does it come about that this arrow

points? Doesn't it seem to carry in it something besides itself? — "No, not the dead line on paper; only the psychical thing, the meaning, can do that." — That is both true and false. The arrow points only in the application that a living being makes of it.[1]

And here, he is making the point (as part of his discursive theses on language and rule-following –which need to detain us here) that there is nothing intrinsic to an arrow that forces us to react to it in any particular way. After all, what would you say to the person who looked at the arrow and then walked left? You could, perhaps, say “no, that means go that way” pointing to the right with your finger. But your eccentric observer might then reveal that he or she interprets pointing gestures by walking from the tip of the pointing finger towards the elbow of the pointer. In the end, Wittgenstein argues, we are left with the facts of “what we do” when presented with pointers and arrows.

Though (or perhaps because) the French were never great fans of analytical philosophy, they seem to have taken it upon themselves to reify Wittgenstein’s remarks on a grand scale.

If you walk footpaths in the UK, you encounter signs like this: 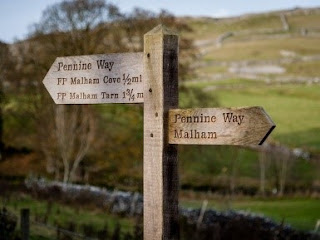 These work perfectly well for walkers. I approach the sign from Malham and I only need to turn my head slightly, as I walk by, to see that I must continue in the same direction for ½ a mile in order to reach Malham Cove. The sign points in the direction I have to go.

Signs like this are useless for driving however. If we were concentrating (as we ought) on the road ahead we should miss them. Instead we have, by and large, adopted the convention that road signs should function like a map held vertically in front of our eyes: 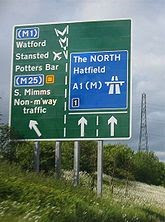 The two arrows on the right of the sign do not mean “ascend vertically”. They mean “drive forwards at ninety degrees to the direction I am pointing in” ie North (And who, of course, would wish to go in the other direction?).

The French, though this is now slowly changing (see for example the cartoon at the start of this post), never really took to this convention as they established their highways infrastructure. Instead, the French adopted the convention that a sign pointing at forty-five, or even ninety, degrees to the direction of travel should be used to indicate “straight on”: 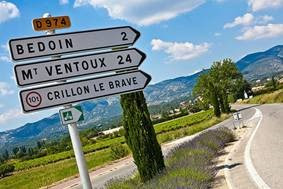 Which is clear enough in a situation like this. Unfortunately, the French also retained the convention that a sign may actually indicate the direction of travel.

At complex junctions, with many roads radiating out from the junction at many angles, towering helixes (that would put Crick and Watson to shame) of road signs are constructed with each sign actually pointing along the road prior to the one intended: 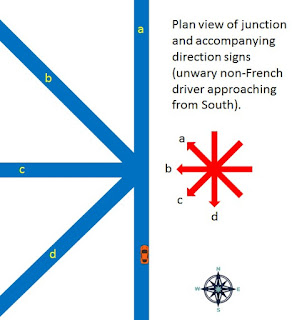 I have only shown the main signs (for clarity). The sign post will also have dozens of signs pointing to lesser destinations such as the local l’Hotel de Ville and La Marie. Some of these lesser signs will actually point in the direction of l’Hotel de Ville and La Marie or whatever it is. Others will, like the main destination signs, follow the convention of pointing at forty-five degrees to the intended direction. It all comes down to the whim to the person who erected the sign post, and how many glasses of vin ordinaire he or she had for lunch beforehand I suppose.

The chances of a non-native selecting the correct road in this situation are exactly zero.

Having selected the road-pointed-down at this junction rather than the road-intended, your problems have only just begun. The French have set far deeper traps for the unwary navigator ………

The French have never quite grasped the function of road numbers

You have just driven through the moderately sized town of Le Chatméchant and made the fatal mistake of driving in the direction that one of the road signs was pointing. You now find yourself heading along a beautiful country road but in the general direction of the Alps rather than the Mediterranean. You pull over and check the map. Rather than turning around and heading back to Le Chatméchant - where you will almost certainly be led astray again - you realize that you can simply carry on, take the next fork right on the D996 towards the little town of Uncheval. Continue through Uncheval on the D996 and you will soon re-join the N666 (the road you should have taken out of Le Chatméchant) and be back on your way heading south.

You drive on and soon reach a fork in the road. There is no mention of D996 or of Uncheval. Instead there is a sign (pointing at some arbitrary angle but apparently indicating the road forking to the right) which mentions the name of a place you are quite unable to locate on your Michelin map (without consulting the index). Nonetheless, you conclude this must be the correct turning and you bear right.

You are soon reassured. Every hundred metres, as you drive along, there are little concrete signs informing you that you are still on the D996.

Since there are no turn-offs or junctions, this seems a trifle redundant, but I suppose it helps those with poor short term memory.

You then arrive in the centre of Uncheval. There is a lovely town square, a Hotel de Ville, and a Marie and a dozen roads radiating out from the central square.

Which one to take?

All mention of the D996 has now ceased. You are presented with lots of signs (all of them pointing at entirely mysterious angles) which list all sorts of places you might love to visit if you had time but bear no relation to any of the places which (you have noted from the map) lie along your intended route.

Now you have two choices:

Craning your neck and then getting out of the car to get the view from the other side of the peuplier tree you draw up a list of each of the dozen or so indicated place names. You look each one up in the atlas index and then try to locate them on the map. Eventually, you suppose, you will find a place name that lies on the D996 and be able to choose the correct road out of Uncheval.

But the French have one more trick up their sleeves ..... well not really a "new trick", more a further illustration of the fact that identifying roads (rather than destinations) is essential to navigation:

Imagine, if you will, that you are travelling from Belsize Park (perhaps after a bit of “loving on the floor”) and wish to get to Mornington Crescent.

Imagine further that you are entirely unfamiliar with the topology of the London Tube system and that, once you get down to the platforms, no information whatsoever is provided. All you get is trains arriving and leaving declaring their final destinations as “Edgeware”, “Mill Hill East”, “High Barnet”, and Morden.

(Actually, this is more or less the situation you always find yourself in when trying to use the Paris Metro; but I am using this as an analogy for navigating roads using only direction signs.)

The destinations of the trains are not going to help you find your way to Mornington Crescent.

Let us now imagine that the illuminated signs on the fronts of the trains and on the platforms announce not just the final destinations, but some of the intermediate destinations. Thus:

That is still not going to help you get on the right train.

What is required (and what Transport for London – in their wisdom – provide) is some way of distinguishing between the two lines (the line that goes through Charing Cross and the line that goes through Bank). And that is, in fact, how TfL do it. The train signs announce “Morden via Charing Cross” or “Morden via Bank” (or more often “Kennington via ~” ….. but let us stick to the point).

I have often thought it would be clearer from a navigation standpoint if the Northern Line were split into two lines (as it once was: City and South London Railway and the Charing Cross, Euston and Hampstead Railway) but I do not suppose they will take any notice of my views here. At least TfL do provide a way of distinguishing the different routes and you can (if you look on the map and find out where Bank and Charing Cross are) figure out which train to get on to reach Mornington Crescent.

In the analogous situation on a French country road, you have a much chance of reaching your intended destination without getting lost as you have of arriving at Mornington Crescent by driving down the D996.

In short, responsibility for signposting in France should be taken entirely out of the hands of the French and handed over to us. They could take over our cooking and cheese production (except, of course, for Wensleydale).

Still, there are few finer places on the planet to get completely lost than the back roads of France.