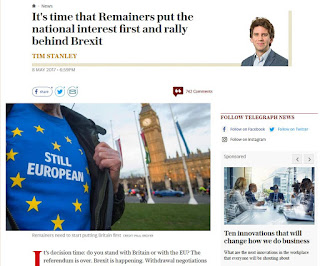 "It’s decision time: do you stand with Britain or the EU?"

Do you support Lilliput or Blefuscu in their egg wars?

When are you going to stop beating your wife?

I work in international IT standards for a German, French, Finnish, UK firm headquartered in Sweden. I am currently working on a pan-European defence data harmonization project. My wife is an EU citizen (German). I travel quite often and most of income from the UK’s branch of the company I work for comes from abroad – especially, but not exclusively, from other EU countries.

Post Brexit my working and personal life will become more complicated (I’ve already spent 100s of man-hours battling with the Home Office just to get a residency permit for my wife) and less lucrative. My firm, its employees, and I will probably make less money and pay less tax and we’ll spend more time on red tape. But we’ll survive, or move abroad. The people who are really going to be hit badly are less well paid and unskilled in places like Sunderland – ie the people who voted for Brexit.

I’ve yet to hear of a single concrete advantage that Brexit will bring.

So what are Tim Stanley’s arguments?

Exhibit A: those who say Britain has a big bill coming

This is a total non-issue. When in the EU we made various financial commitments – like Nigel Farage’s pension and the European Medicines Agency’s rent for the next 20 years (this in London but they’re now moving to Paris to pay rent there cos we’re leaving that too). We and the 27 will obviously argue about the amounts and presumably reach a compromise which a majority of the 27 will have to agree to. We’ll have to do this before we can start talking about trade. The amounts are significant but small beer in terms of our long term trading activities.

Exhibit B: those who believe everything the EU says

"We are threatening to walk away with no deal in the hope that, in order to persuade us otherwise, the other side will offer us the best deal. This position is framed to serve the national interest. More journalists should honestly explain it."

This is just nonsense.

We can’t get a good deal. This is nothing to do with Juncker. May has ruled out a good deal. She has said she wants to end free-movement and leave the Single Market and the Customs Union. These three decisions will hurt the UK badly. The only thing left to deal over is therefore a Canada-style Free (ie low or no tariff) Trade Agreement. Both the UK and the EU will benefit (a bit) from this so it will probably happen – though it will take several years and require the unanimous agreement of the 27, so it won’t be easy. If we walk away, it is simply the FTA we shall be walking away from. We’ve already walked away from the really good stuff. In short the conversation between May and the EU has been a bit like this so far:

Given May's stance, walking away or staying in the negotiations will yield almost exactly the same outcome: loss of the advantages of Free Movement, the Single Market, and the Customs Union and, in their place, some kind of free trade agreement. (We’ll come back eventually and make an FTA even if we initially walk off in a huff cos it would be bonkers all-round not to. But an FTA will be small recompense for the trade we shall lose through our other decisions.)

Exhibit C: those who yearn for failure

We don’t yearn for failure we simply point out that failure is almost inevitable.

We shall (one day) get an FTA with the EU and (possibly) with some other countries. These new FTAs may be better than what the EU has managed to negotiate with those third countries (though this seems hard to imagine given the much bigger clout of the EU). But even if all this goes swimmingly, the resulting increases in trade are vanishing unlikely to compensate for the losses of our existing trade with the EU.

International cooperation, product standardization, regulatory harmonization, travel, migration, and trade all benefit the world in general and the UK in particular. The efforts of people like Tim Stanley and 52% of the British public (in their current mood) will put a brake on all these activities for a while – to the detriment of the UK, its international standing, and its economy. In the long run, however, the UK will come to its senses and stop trying to think it can have capitalism in one country.

So I stand with Britain and the EU.

Britain is much better off as part of the Single Market and Custom Union and will suffer when it leaves and takes away our freedom to live and work across 28 countries. I am afraid I am going to carry on saying this and fighting against isolationism and xenophobia as long as I draw breath; and if Tim Stanley thinks this unpatriotic, tough!

The real traitors are the politicians who told bare-face lies in order to get the vote they wanted. It is they who are irreparably damaging our country not people like me.