The Monstrous Secrets of Quantum Physics

My ramblings here were inspired by Professor Jim Al-Khalili’s wonderful (and wonder-full) new television series “The Secrets of Quantum Physics” which I urge you all to watch.

As a small child I visited Loch Ness with my parents and during our stay I remember visiting a small shop whose mission was clearly to sell piles of kitsch to passing English tourists. One item caught my eye and seized my attention – sparking trains of thought that have remained with me throughout my life. It was an “ornament” - or perhaps five ornaments – designed to represent the eponymous monster. Something like this: 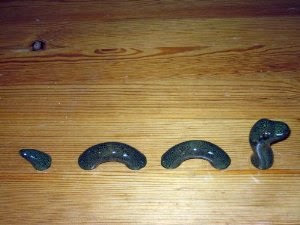 Except the one I saw had three U sections and was rather more baroque in appearance – if not rococo. Even as a small child I could see that it was the last thing on earth my parents (who prided themselves on their good taste) would want on their mantelpiece.

But even more striking than the astonishing ugliness of the artefact I saw was the fact that, at first, I could see no sense in it. I had grown up fondly believing – on the basis, I suppose, of my dinosaur books – the Loch Ness monster was a Plesiosaur – stranded in the Loch since the late Triassic: 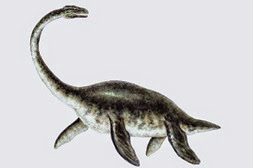 The five elements of the ornament I saw as a child were not arranged in a nice line (as in my first picture) but randomly scattered around on a display surface. This confused me still further.

The five sections were sections of a serpent-like creature and the implication was that there were four more sections hidden below the surface (which represented the surface of the loch) which connected the pieces I could see together and which made sense of what I could see. Except that those sections were not actually hidden, they did not exist at all – aside perhaps in the fertile imagination of a small child admiring the monstrous creation.

The confusion that I experienced before the moment I twigged is exactly what I feel when I consider the various experiments that have established modern quantum theory ….. except that, if anything, I am even more perplexed by quantum theory. Imagine that, instead of an ornamental monster, it had been a toy monster that moved around on the surface in the fashion of a real serpent but that not only (never having seen a real serpent) did I find myself unable to even imagine any kind of connection between the various parts, but that I had also been assured that there were no hidden parts or connections or strings or magnets involved. What I saw was all I got. This is not a bad analogy (though please remember it is only an analogy) for where we are with quantum theory – or at least where I am.

Jim Al-Khalili gave an excellent demonstration of the two slit experiment – which you should take a look at so I don’t have to explain it to you. This is an experiment that you could (just about) perform on your kitchen table - using photons produced by a table lamp.

It is weird enough that, as this experiment clearly shows (especially in its more sophisticated modern versions), that small things behave in some ways like waves and in some ways like particles – if you are not flabbergasted by this, please explain to me what a beach ball and a water-wave (not the water in which the wave occurs) have in common. But it gets weirder and weirder.

This experiment has been done with electrons and even bigger things like “bucky-balls” - which you can actually “see” as fairly discrete things using a scanning electron microscope. Such entities can be fired one at a time through the double slits (as Jim demonstrated) and they hit the screen behind just as single particle might be expected to but, over time, the hits build up into an interference pattern. So the trajectory of each individual particle seems to be influenced by what the other particles fired before and afterwards did or will do.

And it gets weirder still……

If you close off one of the slits, the particles start to behave exactly as you would expect them to do. So this implies that, in the two slit experiment when the particles are fired individually, each particle passing through one of the slits “knows” that the other silt is open and that it could have gone through that slit if it had “chosen” to.

I find myself imagining that each electron (or whatever) has a semi-attached travelling companion – rather like the dæmons in Philip Pullman’s fantasy trilogy His Dark Materials. Pullman’s dæmons (which take animal forms) are physically separate from their human hosts but intrinsically bound to their hosts.

I also think (in this context) of my cat meeting me in our hall on my way to the kitchen. She will accompany me through the same door (if one door is open) or rush round through the other kitchen door (if both doors are open). Once inside the kitchen, my cat/dæmon will try (with varying degrees of success) to lead me in the direction of her food bowl.

Like many other analogies, this one works in some ways and fails in others. It certainly needs more work. But how reasonable is it – given the bat-shit craziness of what we are trying to explain – to come up with such bat-shit crazy thoughts?

One of the problems with the apparent craziness of quantum science is that all manner of fruit loops, charlatans, quacks, and mystics think it gives them licence to promote belief anything from extra-sensory communication with aliens to homeopathy ….. and perhaps dæmons and Loch-Ness monsters too.

The crucial thing that such crazy people overlook is that, in the end, science has to come up with the goods in terms of providing hard experimental (or, at least, observational) evidence. Whether it’s dark matter, multiverses, string-theory, the conditions that gave rise to the “big bang”, or hidden variables that explain what’s really going on in quantum theory, the apparently crazy speculations of scientists count for nothing unless they eventually yield proposals for real world tests that will yield real world results.

Like Jim Al-Khalili (though he didn’t put it like this himself) I yearn for some kind of Loch-Ness-monster-in-the-shop moment whereby the hidden (and testable) mysteries of the two-slit experiment and quantum theory are all revealed to me. Until that moment comes, Jim, and all of you, and I will just have to live with the fact that the theory works and makes highly accurate and testable predictions about what we see going on in the world but makes no sense whatsoever.

Your anguish at this realization may be lessened or increased (or both simultaneously) by watching Jim next Tuesday (2014-12-16) at 21:00 on BBC four.