The Pope and paedophilia - are we being fair?

Pope Benedict XVI's opening salvo during his recent visit to these islands was a blatant attempt to link “aggressive secularism” in the UK with Nazism in Hitler's Germany.

Even in our own lifetime, we can recall how Britain and her leaders stood against a Nazi tyranny that wished to eradicate God from society and denied our common humanity to many, especially the Jews, who were thought unfit to live.

I also recall the regime's attitude to Christian pastors and religious who spoke the truth in love, opposed the Nazis and paid for that opposition with their lives.

As we reflect on the sobering lessons of the atheist extremism of the twentieth century, let us never forget how the exclusion of God, religion and virtue from public life leads ultimately to a truncated vision of man and of society and thus to a 'reductive vision of the person and his destiny' (Caritas in Veritate, 29).

Today, the United Kingdom strives to be a modern and multicultural society.

In this challenging enterprise, may it always maintain its respect for those traditional values and cultural expressions that more aggressive forms of secularism no longer value or even tolerate.

Had I had the honour of an audience with Pope Benedict, I might have pointed out that Hitler was brought up as Catholic. He never renounced his faith and indeed claimed he was "fighting for the Lord’s work" in "warding off the Jews" (ref). I would have then seen fit to mention Pius XII and the Reichskonkordat (ref). And finally I should have pointed out that (although we all know the circumstances at the time and if he had not brought this up I should not have mentioned it) POPE BENEDICT REALLY WAS A FUCKING NAZI HIMSELF! 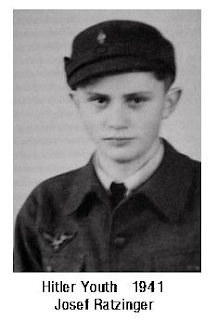 Having said all that, I do feel slightly uncomfortable with the way in which the following list of Catholic sins is constantly repeated by people on my side in this matter: opposing contraception, misogyny, homophobia, spreading AIDs, opposing science, promoting woo, opposing measures to relive poverty, wasting the lives of millions by filling their heads with guilt and mysticism and demanding their adherence to a barmy worldwide cult, and (finally) buggering children.

On all except that last item I say “guilty as charged”. But that last item is slightly different. Of course the Catholic church are guilty of the sexual abuse of children on a massive scale and they are guilty of covering this up and allowing it to flourish and continue. You can also see how the insistence on priestly celibacy and a cult of secrecy facilitated such practices. Nonetheless, while the Catholic Church really does preach that the use of condoms and oestrogen/progesterone pills (not, as far as I am aware, much discussed in the Bible) is evil and really does preach that women are lesser beings and homosexuals are an abomination, the Catholic church has never actually preached paedophilia.

I can see why people might think I am splitting hairs here, but I don’t think I am. After all, if Hitler really had been an atheist rather than a Catholic, I think I should still have objected just as strongly to the Pope's comments. 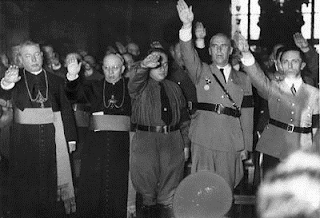