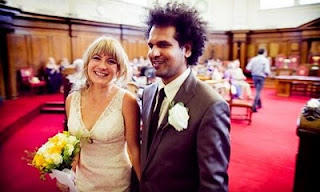 Reading Sarfraz Manzoor’s moving article about the reaction of some members of his family to his marriage (to Bridget, who is white and not a Muslim) I began to muse on what sort of circumstances might prompt me to refuse to speak to my brother. I suppose that if I heard that he had disowned a member of his family because that family member had fallen in love with someone of the ”wrong” colour or the ”wrong” religious tradition*, that would do the trick.
After all, if someone cannot see for themselves that this kind of “not like us” view of other sections of humanity is morally repugnant, it is hard to think of any common starting point for any sort of discussion about ethical matters, or indeed about anything at all. As Ludwig Wittgenstein put it: “Whereof one cannot speak, thereof one must be silent.”
I think Sarfraz Manzoor’s relatives who continue to oppose his marriage and who continue to refuse to talk to him are very lucky indeed that Sarfraz still seeks reconciliation with them. I find it hard to imagine that I could ever be so forgiving in similar circumstances.
I have not broached this with my daughter, Sarfraz is already spoken for, and if I were to meet him personally on a regular basis I’d probably break down and suggest he refrain from using a Van de Graaff generator to style his hair; but, these minor caveats aside, I’d be very proud to have Sarfraz Manzoor as my son in law.
Telling anyone in my “community" about this would not be a problem, since the only community I belong to is humanity.

*I use the term religious *tradition* advisedly since neither my brother nor I believe in any sort of supernatural overlords, but we are both, I suppose, “cultural Christians” who celebrate Christmas and Easter albeit in a largely (though not completely) secular fashion.