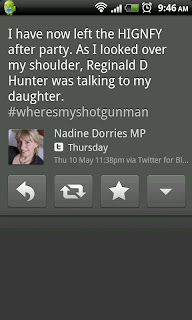 Was it a Joke?

Obviously I'm not the biggest fan of @NadineDorriesMP but I don't think what she said last night was racist. It was a joke. Lighten up ppl.

Now I realize that Nadine Dorries has been accused of all sorts of irrationality and erratic behaviour in her time, but I don’t think even her fiercest critics have accused her of actually shooting (or threatening to shoot) people with a shotgun. Obviously Nadine Dorries’s tweet was intended as a joke and it never occurred to anyone of remotely sound mind to think otherwise.

But just because it was a joke does not necessarily mean that it wasn’t racist – people do tell racist jokes!

Should the CPS Prosecute Nadine Dorries?

Only if they wish to contravene their own “public interest” guidelines again and make themselves look as ridiculous again as they made themselves look when they launched the prosecution of Paul Chambers (@PaulJChambers).

[NB The CPS (@CPSUK) are not generally irrational. Most prosecutions they launch are perfectly fair and reasonable. It may also be perfectly reasonable to launch prosecutions under Section 127 in cases where there was intent to menace and/or a victim felt menaced and/or a menacing message was actually sent to a victim. The CPS just made a huge error of judgement (which was compounded by the courts – who didn’t really understand the nature of Twitter) in this particular case.]

I suppose the only public interest that might be served by the prosecution of Nadine Dorries is that the pernicious nature of Section 127 (as recently interpreted by the courts – those who crafted the legislation obviously never intended it to be misused in this way) would be brought to the attention of the House of Commons. It is quite certain that such a prosecution (at least one held in front of the same judges who tried Paul Chambers) would succeed.

What was the Joke?

If the tweet had simply been: “As I looked over my shoulder, I saw a man talking to my daughter #wheresmyshotgunman”, the “joke” would have hinged on the facts that 1) as parents, we tend to be overprotective of our offspring and 2) men in general tend to be “just after one thing” when they engage with women – a somewhat sexist generalization I submit, but let’s let that go.

Now let us suppose the tweet had named a specific person (say Mick Jagger): “As I looked over my shoulder, I saw Mick Jagger talking to my daughter #wheresmyshotgunman”. Now the “joke” hinges (as before) on the overprotectiveness of parents and Mick Jagger’s specific reputation as a Lothario.

[NB I pass no judgement on whether MJ deserves such a reputation. Whereas Jonathon Ross (@Wossy) has described MJ as “an old goat”, MJ’s former girlfriend, Marianne Faithfull, tends to defend him. I merely assert that MJ has such a reputation and that this fact is enough for the “joke” to work.]

But the tweet in question did name a specific person; not Mick Jagger, but Reginald D Hunter. So does Reginald D Hunter have a reputation as a womanizer or cultivate such an image in his public performances? I’d say not. I’d say Reginald D Hunter’s public persona (I’ve no idea what he’s like in “real life” of course, but that’s not relevant here) is more that of an innocent abroad with the exaggerated manners of the American South who’d ask a father’s permission (and call him “Sir”) before taking out his daughter. 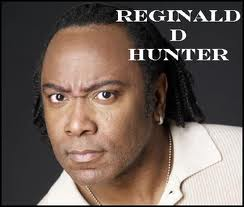 So what specific attribute of Reginald D Hunter did Nadine’s tweeted “joke” hinge on? I wonder what it could be.

So is Nadine Dorries Racist?

Nadine Dorries, as Sunny Hundal‏, also pointed out, has no history of making racist remarks and (in spite of all her other failings) it would not surprise me in the least if her daughter actually took up with a black man and Nadine D did not turn a hair.

Carole Thatcher is probably not really racist (at least in the way Nick Griffin is) but that doesn’t mean that it’s ok for her to call a black French tennis player “ a Froggy gollywog”.

Ken Livingstone is certainly not homophobic or anti-semitic (I remember the days when the same tabloids which have recently criticised him were castigating Ken for his “loony left” commitment to anti-racism and gay rights) but that doesn’t mean that Ken’s references to the Tory party being “riddled” with gays or his remarks about “rich Jews” should not raise our eyebrows somewhat.

To the young people studying To Kill A Mocking Bird at GCSE last year, the events and attitudes portrayed seemed like part of ancient history – or so was my impression after accompanying a group of them to a stage adaptation of the novel. Yet, as late as the year I was born, a 14 year old black kid Emmett Till was horrifically murdered in Mississippi for allegedly wolf-whistling at a white woman and many such cases are still within living memory for some older people. Although “lynchings” of black men suspected of relationships with (or simply feelings of attraction towards) white women (which had been commonplace during the previous hundred years or so) were coming to an end by the mid 1950s, it took a lot longer for the attitudes that gave rise to such racist atrocities to wane.

I think we can safely assume that no such thoughts entered the (conscious) mind of Nadine Dorries as she wrote her tweet (in fact I’d go as far as to say that a failure to connect ideas in a coherent fashion is what often characterizes Nadine D’s public statements) but that fact does not make a joke about killing a black man who shows an interest in a white woman any less disturbing – even in 2012.