Having read a piece by Toby Young in which he castigates the author Michael Rosen for a couple of proof-reading mistakes and uses this as a vehicle (a JCB perhaps?) for heaping praise on Michael Gove, I decided to apply some of the rules I had drummed into me at my traditional 1960s primary school (very much the style of schooling Michael Gove seems to approve of) to Michael Gove's What does it mean to be an educated person?:

And that is why, under this government, the Department for Education is setting higher expectations for every child.

This violates the "rule", I was taught, that you should not begin a sentence, still less a paragraph, with a conjunction.

Fans from abroad, she said, would apologise for their poor English.

This violates the "rule", I was taught, that words with Greek roots (apologizesthai) should take "ize" endings. (If you are under the misapprehension that "ize" endings are "American", please see the Oxford English Dictionary.)

We are introducing a basic test of competence in spelling, punctuation and grammar at the end of primary school.

This violates the "rule", I was taught, that lists should include the "Oxford comma", thus: "spelling, punctuation, and grammar". 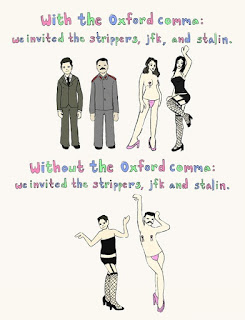 [1]
This sentence is, in any case, badly phrased as it invites that interpretation that "grammar at the end of primary school" is a single item. It might have been better to write:


For students leaving primary school, we are introducing a basic test of competence in spelling, punctuation, and grammar.

Though many other equally good (or better) variations are possible.

But I will abjure such Ciceronian rhetorical tricks.

This violates the "rule", I was taught, that the first person singular and plural take "shall".


He, and many others, are deeply worried about what he calls, ‘the enacted school curriculum: what actually gets taught in classrooms.’

This violates the "rule", I was taught, that it should be possible to delete the text within parenthetical commas leaving a grammatical sentence behind. The commas here are simply incorrect. This sentence should simply begin "He and many others are ..."


But through the development of their natural curiosity, talents and potential.

This violates the "rule", I was taught, that sentences should include a verb.
There are dozens of similar "errors" in Gove's essay.
Of course all the above "rules" (with the possible exception of the final two) are moot, but I wonder how Michael Gove might respond here. Would he admit that these "rules" are correct and he broke them; or would he insist that these "rules" are incorrect and that he has some other rules which are really correct; or would he concede that the "rules" of "correct" English are a matter for debate and of evolution? Any of these three options would seem to undermine his position somewhat.
As long as we are relaxed about the missing Oxford comma, we cannot condemn the following sentence for breaking any rules of grammar:

I suspect those of us who are parents would recognise that there are all too many children and young people only too happy to lose themselves in Stephanie Meyer, while away hours flinging electronic fowl at virtual pigs, hang out rather than shape up and dream of fame finding them rather than them pursuing glory.

This is, nonetheless, an appallingly badly constructed sentence. I had to read it four times (experimenting with different stresses) before I got the sense of it. The final "them" is especially problematic. Does the fame find the pigs or the fowl or the children or the parents? Obviously it is the children but the sentence does its best to mislead the reader.
I suppose Michael Gove might argue that, although my above remarks are rather embarrassing for him, the fact that I am able to embarrass him is testament to the quality of the schooling I received. Nothing could be further from the truth. Although I had all the above "rules", and many others, drummed into me as a child, I was quite incapable of applying them properly at the time. My terrible English and my even worse handwriting ensured that I only just scraped through my English Language O level.
What turned me into the towering king of blogging I have become today (ok, I'm not really the "towering king of blogging", but my posts are better than anything Michael Gove has ever written) was the fact that I devoured books from an early age. My love of books was bequeathed not by my "reading is a chore but you've got to do it or we'll hit you" school but by my parents. My father left an even more "traditional" school with no qualifications, but the Marxist (in those days) Workers' Education Association and later the Labour-created Open University saw to it that he died with an honours degree - leaving a house full of books that I am still trying to find room for in my own house. Next weekend an old friend of his is visiting. He graduated from Trinity College Oxford and arrived at this destination via the aforementioned WEA and the Trades Union Movement's Ruskin College.
I suppose my favourite passage in Gove's diatribe is the following:

Jacqueline Wilson is not - by any measure - a reactionary nostalgist in the republic of letters. Her work deals - unsparingly and in detail - with divorce, mental illness, life in the care system and growing up poor. We’re not talking pixies dancing under the Faraway Tree, here.

Jacqueline Wilson is, like Michael Rosen, an inspiring children's author and Gove is right to praise her. Gove, however, is a man who has taken countless schools out of the control of elected bodies and handed them over to groups of fruit-loops who believe in everything from creationism, transubstantiation, reincarnation, winged-horses, and yogic-flying to (yes) gnomes. He will, thereby, leave a legacy of segregated schooling which I'm sure will be the same success as it has been in South Africa and Northern Ireland. Quite how Michael Gove can mention "pixies" with a straight face rather puzzles me. Moreover, the problem posed by a history teacher who does not know the date for (say) the Norman Invasion would seem to pale into insignificance alongside the problem posed by a science teacher who believes that the earth was created six thousand years ago.
Gove also includes some grossly disingenuous misrepresentations of Michael Rosen's views and a thoroughly dishonest account of the use of "Mr Men" in an exercise by the Active History web-site.
It should, perhaps, be conceded that not everything Gove has to say is complete and utter tosh. Gove is right to criticize the lamentable IT syllabus and right to say that children should be encouraged to write well and right to say the children should be encouraged to read good books. How children are best encouraged to write well and read good books is, however, not a matter best decided by Michael Rosen (infinitely better qualified though he is than Michael Gove to comment on such matters), or by Marxist theory, or by my anecdotal remarks, or (especially) by whatever popped into Gove's head last Tuesday. How children are best encouraged to write well and read good books could, and would, best be decided by subjecting the matter to empirical examination - you know, controlled trials, evidence, statistical analysis, all that sort of thing. A science teacher (though preferably not one from a creationist school) could explain it all to Gove, if Gove were remotely interested in such things.[2]
I hope that, while I make no attempt to pontificate on the best way to educate our children, my above remarks do establish that this is a complex subject that defies simplistic analyses and that, when Gove talks about "correct English" and suggests that the only things holding kids back from higher achievement are the unions and left-wing teachers, he is (to use the plainest English possible) talking out of his arse.
............. oh, and I expect that Michael Rosen's books will still be inspiring children to read when Michael Gove is a minor footnote in even the most right-wing history books.


PS Muphry's Law - postulated by the splendid writer and Telegraph fifth columnist Tom Chivers (@TomChivers) - suggests that "Any work criticizing the spelling/grammar of another piece will itself contain an error". On that basis, this post will probably contain about two dozen mistakes. Any corrections gratefully received, admitted, and acted upon - I'm a scientist not a pompous demagogue!

[2] It has been brought to my attention (by Anthony Cox @drarcox), since I wrote this post, that Michael Gove is actually planning some controlled trials - a move which I can only applaud. I have, therefore been somewhat unfair to him (above) on this specific issue. It remains the case, however, that none of his current pronouncements are based on such research and these would still seem to reflect nothing more than his strongly held prejudices.