My son Max and his friend Claire entered the ticket office at the train station in Bradford the other day. As they approached, the man behind the counter put down his newspaper and cast a baleful eye over Claire’s bright blue hair. “Hebden Bridge?” he asked. He was right first time.

A few days ago I saw that Paul Zachary "PZ" Myers associate professor of biology at the University of Minnesota Morris, Pharyngula blogger, and sworn enemy of creationist nut-jobbery in all its forms was coming to speak in Hebden. I had to do a double-take. Unfortunately, since I originally saw this, I’d been up to my eyeballs in work and miscellaneous other activities - mainly on behalf of others (as we say in Yorkshire: “A friend in need is a bloody nuisance”) and PZ’s visit had gone completely out of my head.

Then at about 7.30 this evening I saw the following tweet:

Getting ready at the Trades Club. Bar in the back! http://t.co/F0ZFMCBeum

I remembered: “Doors 7.30pm – 8pm start”. Hebden Bridge is about 30 minutes away by car from my house. I found my keys, leapt into the car, forgetting my phone, and hit the road. Taking the empty back roads over the moors I somehow managed to get to the Trades Club with two minutes to spare. But there was nowhere to park at the venue and I had to park about half a mile away and run like Mo Farah (well, like Mo Farah would run if he were giving Eric Pickles a piggy back) back to the venue.

I pelted up the stairs (squeezing past a lady who was saying to her friend “eee we’ve got a professor in ‘ere tonight”), bought one of the few remaining tickets, and joined PZ’s talk – which had, I was assured, “only been going on for a couple of minutes”.

Later I asked a fellow local how on earth we’d managed to get the world famous PZ Myers (hot foot from the dreaming spires of Oxford) to come and speak at Hebden Bridge. “Well he’s on his way up to Edinburgh. I suppose it was on the way” he suggested.

Now don’t get me wrong, Hebden Bridge is a lovely place (it is, after all, in Yorkshire) and I urge you all to visit if you are ever up this way. But it is not normally on the beaten track of internationally renowned academics.

Anyway, PZ’s talk (on American creationists) was, of course, splendid and highly entertaining and much appreciated by the audience – who were clearly clued up on much of what PZ had come to speak about.

Though it quickly became clear – as PZ himself acknowledged – that he was “preaching to the choir” there was plenty of interesting material that I (and I expect many others there) were not particularly aware of. One thing PZ pointed out was what a recent phenomenon creationism (based on a literal interpretation of biblical texts) is. Another thing, which I certainly hadn’t really appreciated, was the origins of this ideology in the teachings of quite small numbers of people who, even by the standards of American god botherers, were a pretty wacky bunch. Disturbingly, the nonsense spread by such crazies (far more extreme even than the sort of arguments scientists were having to rebut in the days of the famous Scopes Monkey Trial) have now become part of mainstream thinking and are now embraced by about half the population of the USA. 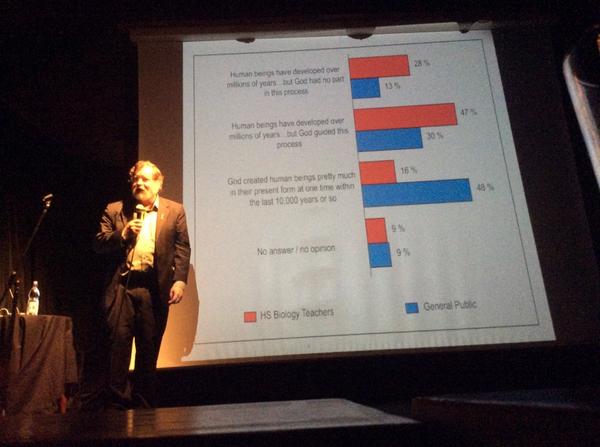 Even more disturbingly, we learned, the creationist movement in the USA is astonishingly well funded. Its ludicrous, though well produced, propaganda is funded by rivers of cash from generous, though credulous, donors and income from theme parks - which, inter alia, present theropods from the late Cretaceous Period being herded onto a 4000 year old Ark.

PZ’s talk was followed by questions and discussion of how best to stop them ever coming here. PZ took “here” to mean “the UK”, but obviously they really meant “West Yorkshire”.

So a really excellent talk met by a really warm reception – a bit too warm …. especially after I had run all the way from the car park. We may have fewer religious zealots than the Yanks, but they do - it has to be said - have better air conditioning than we do.

I shook hands with PZ and thanked him before leaving and should like to take this opportunity to say how flattered we all were that he took time out to come and share an evening with us here in God’s own County.

(I was about to suggest they could try and get Prof Brian Cox next year but then I remembered that he's from Lancashire.)