Now I'm not a lawyer and you should take any legal conclusions I reach below with a pinch of salt. But I am good at modelling (or at least I make a living from it) and I thought I'd have a go at trying to represent the drug-law framework as a Venn diagram so that we can all understand it better: 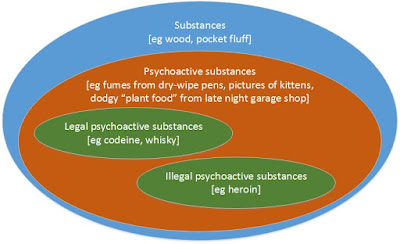 There are lots of different substances in the world. Some, like (say) plutonium, are rather dangerous and should probably be illegal on account of their dangerousness. Some are more benign - like say water (though even water will kill you if you immerse yourself in to for too long or even if you drink a few litres too quickly) - and quite useful so should probably be legal. I have an open mind on some things .... like "pop-tarts" and copies of the Daily Mail.

Hmmm. I suppose that makes sense so far .... though it covers a rather broad range of substances - many of which have yet to be discovered. And it, in effect, makes all those substance (apart from those in a new list of "Legal psychoactive substances" that come along with the new bill) illegal .... but also (logically) legal by virtue of not being in the set of "Illegal psychoactive substances". Some of these substances - legal or illegal (or perhaps in a quantum superposition of legal and illegal) - may or may not be very bad for people, but I've never been quite sure why we ought to punish people for doing themselves harm (and in addition to that harm) by imbibing such substances. By the way, I suspect that breathing in the fumes from dry-wipe pens could be especially bad for your liver and brains if you overdid it and it's probably best to stick to the water-based ones - though they are not as good as the old smelly ones for writing on (or cleaning off) white boards.

I suppose the first thing to point out is that washing down codeine tablets with whisky will probably kill you - as will whisky on its own if you drink too much of it all at once ... or even over an extended period if you overdo it. If you buy your codeine over the counter from the local pharmacy it will come with paracetamol and you will die particularly horribly if you take too much.

... listed by the old Misuse of Drugs Act

If you take heroin you will get terrible constipation. It is also nearly as addictive as nicotine - one of the legal (and also not illegal) highs. Also, because it is illegal, any heroin you buy will probably come mixed with all sorts of things that are really bad for you - especially if you inject them.

As with dry-wipe pens and tobacco and lots of other things, it's probably, on balance, not a good idea to take heroin .... but should it be illegal?

In short, I have the impression that whoever dreamed up this legal framework must have been completely off his (or her) face.