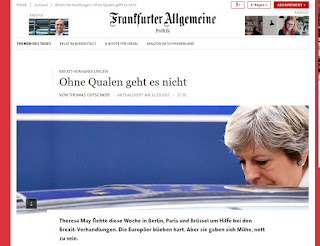 NB This a rather rushed translation from a native English speaker (me) with a far from expert level command of German; and I have sometimes taken liberties with the translation to make the meaning clear. Any suggestions for corrections or improvements gratefully received. Since I did this, another translation (by @NinaDSchick - a German native speaker) has been published. It seems to agree - by and large - with mine.

No Gain Without Pain

Theresa May begged for help with the Brexit negotiations this week in Berlin, Paris, and Brussels. The Europeans were resolute but did their best to be pleasant.

Six months ago, Theresa May was at the height of her powers. She had chosen a "hard Brexit, was lauding her "global Britain", had initiated withdrawal from the European Union, and even called for new elections. May wanted even more power. When Jean-Claude Juncker joined her at the table in Downing Street and poured lots of water into the wine, she closed her ears: “No bad news, please!”. “She lives in another galaxy”, the President of the Commission concluded.

At the start of this week, May and Juncker met again for dinner — this time in Brussels. Everything was rather different. The bravado had gone, May pleaded for help. She spoke of the risks she had taken when she recently abandoned her hard-Brexit line and asked for a transitional period of two years, during which everything would remain the same. She reminded her audience that she had also given ground on the delicate issue of money and revealed that her friends and her enemies were hard on her heels, waiting for her to fall. She had no room for manoeuvre and May said that the Europeans would have to create some for her.

Theresa May appeared anxious to the President of the Commission, dejected and disheartened. A woman who hardly trusts anybody but feels trapped in her situation. May’s facial expressions and her appearance spoke volumes. Juncker described her to his colleagues later in the following terms: “Everyone can see it. The Prime Minister is scarred by the struggles within her own party. She has deep rings under her eyes. She looks as though she has not slept. Her smiles are few and far between. She forces them for the photographers, but it her inner torment shines through. In the past, May could literally heave with laughter. her whole body would shake. Now she employs all her resources to avoid losing her temper."

May asked Juncker for the appointment at the last minute. Beforehand, she had telephoned Chancellor Merkel and French President Macron. This was no “charm-offensive". These were calls for help. May knew that the heads of state and government were not prepared to grant "sufficient progress" in the negotiations at the end of the week and would block the move towards the second phase of the negotiations — which is where the UK’s future will be determined. The Prime Minister wanted at least to pave the way for a shift: could the EU chief negotiator Michel Barnier at least be given a mandate for talks about the transitional phase after the UK’s departure?


EU wants to talk about money

For May this would have been a great success. It would have softened the strict negotiating plan and it could have assuaged some of the concerns of UK business-people. They become more nervous with every passing day as the UK heads towards a chaotic, uncontrolled exit. Several banks have already begun to put their emergency plans into action, rent offices in Frankfurt or Paris, and relocate parts of their businesses. Others are preparing for this. In business, no one can rely on hopes or wishes. As a general rule, once jobs and production sites have moved away from somewhere, they never return. Moving twice is not worth the effort and expense.

Europeans are very much aware of the pickle in which the British find themselves. This fact provides the EU with its biggest leverage in the negotiations. That is why Merkel, Macron and Juncker could not soften their stance. All three insisted on further progress, especially on the sensitive issue of money, before there could be direct talks about the future.They did not wish the United Kingdom and Gibraltar to hold a referendum on membership of the European Union and they cannot solve the Brits’ problems for them. The German Chancellery is not prepared to use its coffers to help Britain out and May received the same message from Paris and Brussels. The Europeans had voted.

Nevertheless, nobody wished to make it appear as though they had simply snubbed the  Prime Minister. Merkel, Macron and Juncker know exactly how delicate her situation is. They also recognize that May no longer harbours her former illusions about the effects of the Brexit. He initial threat that "no deal is better than a bad deal" no longer plays a role in the negotiations. Macron has pointed this out publicly and this has been confirmed by Berlin. In her Florence speech May took a very different line and acknowledged how bad it would be for the British economy if the country were in the single market one day, and catapulted out of it the next. Her Foreign Minister Boris Johnson has a very different line. He still assures the British people that they have a "great future", even without a deal. Better to negotiate with the realist May than with the fantasist Johnson, is thus the thinking on the continent. That was why the EU pulled its punches.

The photographs from the meeting are deceptive

Juncker said good-bye to May after supper. He can do this kind of thing like no nobody esle. The communiqué spoke of a "constructive and friendly atmosphere". Yes, the efforts should even be "accelerated". That's how May’s people were able sell the meeting to their media as “a success”, for half a day — until chief negotiator Barnier soberly pointed out that accelerated  two-party negotiations require both parties to speed up.

When the Angela Merkel arrived at the European Council on Thursday, she also made a few friendly noises. Progress in the negotiations is not yet "sufficient" but "encouraging enough for efforts to continue in order that the second phase might be achieved in December". Merkel and Macron then entered the meeting hall together - May just behind and partly between them. All three were in excited conversation. These were the pictures of the day. Nobody could see that they were not talking about Brexit, but about the nuclear deal with Iran.

As for the political results of the Brexit negotiations, May's last-minute diplomacy did not change anything. These matters had been voted on among the EU ambassadors a week before the Summit: The EU27 Governments and the Barnier team are to undertake "internal preparatory discussions" on future relations with London and a transitional phase. This was a positive response to May’s Florence speech. It is explained in negotiating circles that, without such preparation, it would not be possible to enter into the second phase anyway. Guidelines have to be drawn up again. The negotiators firmly believe that their papers are public knowledge anyway and have even said that their opposite numbers in London are already aware of the exact position of the EU27 governments before they sit down to negotiate.

Notable progress has been made in the divorce negotiations so far only on the rights of the four million citizens who will be directly affected by the withdrawal - because they live on the "other" side. London privately admits has already conceded eighty percent of the demands made by the EU27. The biggest issue still has to be cleared in the coming weeks: The British negotiators are now openly accepting that the European Court of Justice will have a role in deciding post-Brexit disputes.

On the other hand, the subject of Northern Ireland is very complicated. It is true that both sides agree that there should be no "hard land border" on the island of Ireland, but they have very different solutions. Which one is chooses depends on future relations between the UK and the EU. That is why the Northern Ireland issue is in the process of being moved to the second phase of the negotiations.

The real hurdle is money. The remaining 27 States require the United Kingdom to honour all the financial commitments it made as a member. According to calculations by the EU Commission, this is well over sixty billion net. The Council, as an institution of the Member States, calculates it to be ninety billion euro. The difference is related to other items and cost estimates. Somewhere between the two numbers lies the place where London must end up.

At first the British government did not even want to discuss this. Finances were taboo. Then May made two commitments in Florence:

Firstly, she said that her country would continue to contribute to the EU budget until the end of 2020, even after leaving the country in March 2019. This equates to a good twenty billion euros net. Curiously, she thereby conceded one of the weakest arguments used by the Europeans in calculating the UK’s divorce bill. The amount in question was only arrived at in the context of medium-term financial planning and was not a formal budgetary decision. May, however, was being tactical. This is a sum she finds easiest to sell politically. If her country is to remain in the single market for another two years after Brexit it would have to pay this sum anyway.

Secondly, May made a simple statement: " The UK will honour commitments we have made during the period of our membership." From the European point of view of, that was good. But what does it mean exactly? What obligations? From an EU perspective, it is a question of: unpaid bills (31 billion euros), future pension burdens (9 billion), special funds (4 billion), and the assumption of liability risks. Nobody wants London to specify concrete numbers. The bill would only be presented at the time of exiting the EU and may be revised many times before then. However, May had to agree, in principle, to the individual items.

The clock is ticking

She is still frightened of making any such commitment. Of course the Brexit hardliners and the media will scream at the Tories - they wanted to get out of the European Union because of the British net financial contributions. Johnson, perhaps also Brexit's minister David Davis, could then land a lethal blow. Nevertheless, Europe's politicians do not want to give in here, and Berlin and Paris cannot give in because they are the biggest net contributors. This would be a super bail-out for Britain.

As chief negotiator Barnier reminds us at every opportunity, the clock is ticking. The next EU summit will take place in mid-December. In Brussels, a highly experienced politician has formulated May’s challenge for the next few weeks: She must explain to her side why the costs of a chaotic Brexit would be much higher than any bill presented by Brussels. And how will that work? From now on, any bad news will be good for Brexit, says the politician. For the gloomier the prospects of crashing out of talks without a deal are, the more likely it is that the UK will open its wallet and make a deal.

So maybe it was not such a bad week for the Prime Minister after all. Her Treasury reported a 3% inflation rate. Prices are rising. A research institute estimated that ordinary families will have 300 euros a year less if trade with the continent has to go through customs controls. And the OECD, the club of the industrialized countries, recommended that the Brexit should preferably be abandoned altogether but, at least, the UK should maintain as "close" a relationship as possible with the EU.