The Brexit negotiations - the view from Germany

My translation (NB I've taken liberties with some of the more idiomatic language to try and accurately preserve the flavour of the remarks rather than the literal wording. I hope my more pedantic readers will forgive me.)

The Brexit negotiations
The nation that became a ship of fools
No nation can surpass the arrogance of the British. The sad truth is that a country which was once a world power is now one that cannot even make its way to the door without stumbling over its own feet.

A column by Jan Fleischhauer 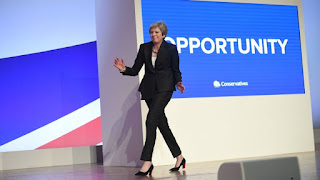 
In his book "Wir Deutschen", Matthias Matussek describes an evening in the German Embassy in London. The ambassador had invited everyone to an event held in honour of the novelist Antonia S. Byatt. When Matussek toasted the writer, she surprised him by asking what he thought of the European constitution. The journalist replied that he thought it was probably appropriate for a European community of states to agree together on a few basic principles.

Her heavily ringed hand remained hovering over her plate for a while, then Lady Byatt announced: "You know, we British do not need constitutions, we are the oldest democracy on earth." She paused. "For young nations like you Germans, however, constitutions may have their place." Matussek writes that it is difficult to describe just how nasal and pejorative the tone of her remarks was. "She was basically saying: You are barbarians. You have only just laid down your clubs and spears. You still need to be held in check."

The United Kingdom is providing a spectacular example of how to make a fool of yourself in front of everyone. What was once the most powerful empire in the world is now a country that cannot make its way to the door without tripping over its own feet.

It is now 28 months since the British decided to say goodbye to the European Union. Sadly, they have yet get up from the sofa.

Until recently, I felt pity when I saw the head of the British government bouncing across the screen at a summit, with her twisted smile and even more twisted offers. Nowadays, I find myself thinking, "May God be with you, but for God’s sake go!”

No deal is better than a bad deal? If they are convinced of that in the UK then so be it. A hard Brexit will cost us dear, no question. But it will be far far more expensive for the British.


My colleagues have written on the golden future promised to the citizens of London. First, the lorries will back up as far as Wales because the borders have ground to a halt. Then, at the filling stations, the fuel will dry up and drugs will become scarce in the hospitals. As Polish plumbers are driven out of the country, people’s homes are threatened with water damage and, sadly, no one will come over to fix the pipes when the lavatories start to overflow.

So they will sit there in their dripping houses, without fuel oil and aspirins, but with very bad-tempered Russian neighbours, who have put far too much money into the English property market and are now furious to see their investments going down the drain. We all know how uncomfortably bad-tempered Russians can become, dear Englishmen. Not a great time to be running out of medication! 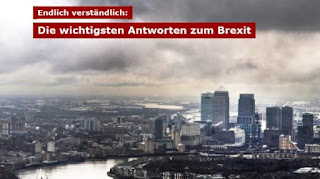 Brexit: At last, the vital answers to all your questions.

Almost everyone who has a say in Brexit belongs to the British establishment – which is to say, they went to ridiculously expensive schools and studied at Oxbridge. These people have now succeeded in enriching our understanding of such places. What, for God's sake, do they learn there? Certainly not any skills that prepare them for the real world. Or would you trust a lawyer who regularly goes into negotiations so badly prepared that the meetings have to be cancelled after a few minutes?

You simply have to immerse yourself in the flow of words from Mrs. May's mouth, at any point, and you realize that you can even be Prime Minister without having any connection to reality.

Journalist: If we leave the EU without a deal, does not that mean that we will have a hard border in Ireland?

May: We said very clearly that we do not want to see a hard border between Ireland and Northern Ireland.

Journalist: But if we leave without a deal, you cannot guarantee that there will be no hard border, right?

May: We're working on a good deal.

Journalist: But if we leave without a deal, there will be a border in Ireland, right?

May: If we leave without a deal, we as the British Government will do our utmost to ensure that there is no hard border between Ireland and Northern Ireland.

Journalist: But you will fail because, according to WTO rules, there will have be a border. Should not you admit this and explain it to the British people?

May: As the British Government, we are determined to do everything we can to ensure that there is no hard border between Northern Ireland and Ireland.

And so on. The downside of possessing intelligence is that it is painful to witness stupidity. Stupid people are protected from this kind of pain thus, when it comes to politics, stupid people have a distinct advantage over intelligent people.

We do not want to be unfair. We are indebted to the British for afternoon tea, Monty Python and the Beatles. These items represent more than many nations have achieved in their history. Also, the British have the Queen, reason enough for a monarchist like me to admire the kingdom. All nations, one might add, face decay at some point in their histories - some slower, some faster.

The fact that the British are now on a downwards fast-track rather than on a slower one may be related to the insularity that the Brexiters so vehemently defend. I have never understood the notion that a people are best left alone. Anyone who wishes to know what centuries of inbreeding can do need only look across the English Channel: Brexit provides a valuable lesson for all those who dream of ending European freedom of movement.


1) Simon Cox (@SimonFRCox) has kindly drawn my attention to this:

A.S. BYATT: I HAVE NOT YET WRITTEN ENOUGH

in which Byatt speaks against Brexit. As Simon put it: "Brexit has its roots in a mindset much wider and deeper than Leavers".

2) Jon Worth (@jonworth) has also criticised this piece