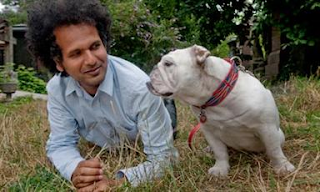 I've been a fan of Sarfraz Manzoor's journalism for many years and have always enjoyed his appearances on BBC 2's Culture Show (which otherwise often hosts some of the most irritating people on the planet). He has also written movingly about his own family - one piece he wrote inspired a post on this very blog a few months ago: Why I’d be more than proud to have Sarfraz Manzoor in my family.

I began following Sarfraz Manzoor a few months ago on Twitter and tweeted the odd mention, RT, or comment on something he'd written. As with most journalists I like I don't necessarily entirely agree with everything Sarfraz writes, though I've certainly never been consciously rude or unpleasant about anything he's written.

For, I suppose, a number of weeks now (I wasn't paying much attention) I had not noticed any tweets from Sarfraz Manzoor and had vaguely assumed he'd gone quiet on Twitter. The other day, however, I tried to RT something he'd said - my attention to which had been drawn by an RT or mention (I can't remember which) from a third party and found that my twitter client wouldn't let me do this. At first I thought there was some kind of Twitter glitch but, to cut a long story short, I realized that I had been blocked by Sarfraz Manzoor.

Now the only accounts I've ever blocked on Twitter were spambots and a BNP supporter who began following me - as a result (I can only assume) of a misunderstanding as great (though in the opposite direction) as the one the led to Sarfraz blocking me.

Anyway, to come to the point, and to something that might be of interest to a wider audience, this experience of being blocked by someone on Twitter enabled me to gain a deeper understanding of what blocking on Twitter does and does not achieve. This may be of particular interest for those who have suffered from bulling, harassment, or stalking on Twitter (as a couple of people I follow have been).

NB all these finding relate to Tweet-Deck, but I assume other Twitter clients behave in a similar way.

Blocking prevents the blocker from seeing the blockee's normal tweets in his/her timeline, but un-following (or not following in the first place) would achieve the same thing.

Blocking prevents the blockee from RTing the blocker's tweets using the normal mechanism provided by the Twitter client, but if the blockee simply types in "RT @blocker whatever the blocker said" this gets round the block.

Blocking prevents the blockee from replying to the blocker's tweets using the normal mechanism provided be the Twitter client, but if the blockee simply types a new tweet with a mention (eg @blocker) in it, this gets round the block - though I'm not sure whether the blocker would see this in his/her mentions.

I am also unsure as to what happens once third parties start RTing or replying to the types of tweet mentioned above, but that's not so significant.

Finally, blocking un-follows the blockee and prevents him/her from re-following the blocker. The curious thing is, however, that the blockee has no explicit indication that or when this has happened and, therefore, no way of discovering what his/her offence was (though I suppose this will often be more obvious than it was in my case).

The upshot is that blocking on Twitter achieves much less than I had (vaguely) assumed - though I confess I had never given the matter much thought until now..... oh and (in the unlikley event Sarfraz Manzoor ever reads this blog post) I'd like to apologize unreservedly for any insult I might have caused, but I genuinely don't know what that insult was.

PS Funnily enough, there was some relevant discussion of these issues on Sarfraz Manzoor's timeline yesterday (04-05-2011) - not (unless blocking is even less meaningful than I suggest above) occasioned by anything I tweeted. Sarfraz complained that he gets lots of people he doesn't know tweeting him (which makes me wonder if he's quite got the point of Twitter) & if those people annoy/bore him he blocks them (which seems a bit like taking out an injunction against Jehovah's Witnesses rather than simply politely asking them to go away - albeit while secretly thinking "and while you're at it, stick your fucking Watchtower up your arse"). It also emerged from Sarfraz Manzoor's timeline that he is easily offended by people who make jokes about his hair. I have to plead guilty here - though, in my defence, I feel inclined to point out that when I made jokes about Brian Cox's and Jim Alkhalili's hair they both re-tweeted it. perhaps, flushed with my success, I got carried away.